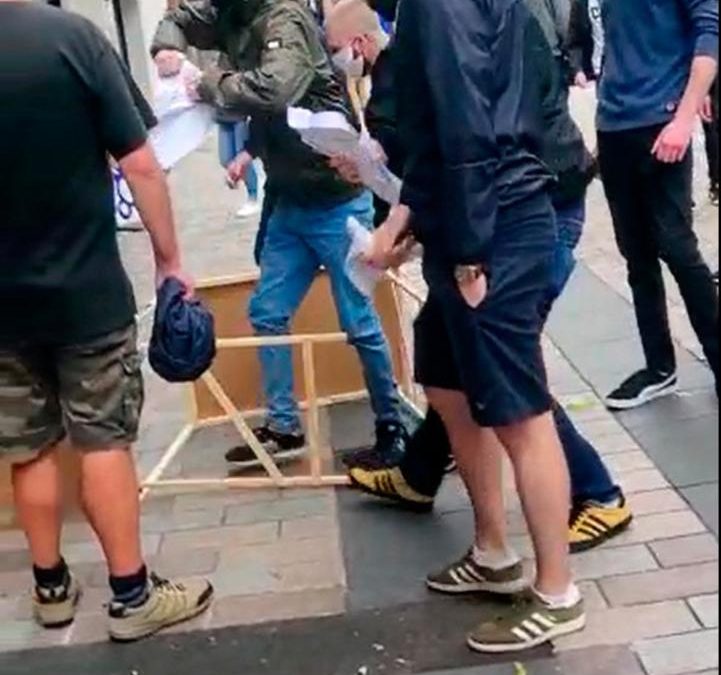 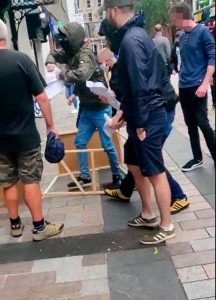 Republicans attacking the stall of the Irish Freedom Party

It’s very easy to have people, or parties, labelled far-Right, regardless of their actual beliefs, which is what a small, but nasty, group of bullies did to a few harmless people in Belfast recently after violently demonstrating their own contempt for democracy.

The victims were a few members of the Irish Freedom Party, which had set up an information stall in the city centre last Saturday week, which was violently attacked and smashed by men who tore up their leaflets, screamed at them to “F*** off” and as they left chanted “Nazi scum off our streets”.

Those whose stall was wrecked sensibly walked away and left the field to the thugs. They then found unchallenged descriptions of their party in headlines and tweets as far-Right, fascist and Nazi.

The Irish Freedom Party, a few of whose members I know slightly, wants to regain Irish sovereignty by leaving the European Union – as, oddly enough, does the Irish Republican Socialist party, better known as the political wing of the Irish National Liberation Army, which was one of the groups proud of attacking them.

So, too, to the best of my knowledge, do three of the four other groups claiming to have been involved – all inspired by the Scottish socialist revolutionary James Connolly of 1916 fame: the Connolly Youth Movement, Lasair Dhearg (Red Flame) and Saoradh Liberation).

I don’t know where the fourth, the Belfast Anti-Fascists, who claimed the attack was their idea, stand on the EU.

As far as I can tell, they’re a “whatever-you’re-having-yourself” gaggle looking for a bit of crack by abusing and trying to silence anyone that doesn’t go along with whatever half-baked and ill-informed fashionable idea they’re espousing about climate, gender, race and so on.

In England, those dominating and encouraging violence in Extinction Rebellion, Black Lives Matter and self-styled anti-fascist groups, are mostly white, middle-class, privately, or grammar school, educated young people adept in climbing on whatever bandwagon gets them kudos and job opportunities. The same seems to be true in Dublin.

I’d suggest to any Northern Irish parents whose children are bragging about their social justice activism that they should look closely at the organisations they’re involved in and at least read their manifestoes.

Considering the Black Lives Matter website was demanding the overthrow of capitalism, the family, the police and in effect all the institutions that have brought about the prosperity of the West, you might think that people like Sir Keir Starmer, the leader of the Labour Party, bishops, senior police and Gary Lineker would have thought twice before taking the knee.

It’s amusing to see how quickly, as they look for financial backing, Black Lives Matter are sanitising their official communications to satisfy the more moderate woke types.

Back to the Irish Freedom Party, which is fiscally and socially conservative, which the last time I checked the criminal code are not prosecutable offences.

As well as being eurosceptic, the party wrote in a letter to this newspaper last week, it is “pro-life, pro-family” and believes in “a small state, low tax, personal freedom and responsibility”.

It opposes “state authoritarianism associated with both communism and fascism” and its members come from “the Left, Right and centre of the political spectrum”.

However, they continued, “unlike the violent thugs who attacked our members’ stall on Saturday, we are committed to achieving our aims through non-violence and the democratic institutions”.

They added, starkly, that the party also “believes in free speech, freedom of association, freedom of religion and won’t be put off by Saoradh thugs who shot a female journalist a year ago because thuggery never deserves to win”.

I am sure my dear and much-missed friend Lyra McKee would be glad to be called in aid of non-violence. It would be a stand against the thugs to point out at every opportunity that the only fascists in those videos they think show them as heroes are them.

“Just so extreme antifa (anti-fascist) idiots know,” ended the letter, “we will go where we choose, whenever we choose.”

I hope that the PSNI and the public ensure that they can.