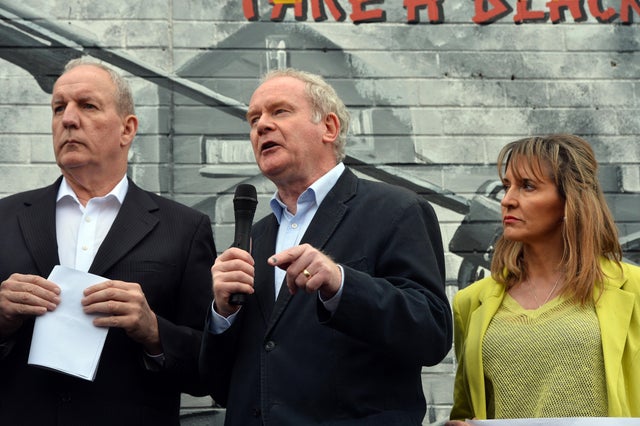 The Irish Republic has much to be ashamed about in its attitude to the hell the Provisional IRA unleashed on Northern Ireland, which has spread south in the modified form of gang warfare, corruption and the erosion of democracy. 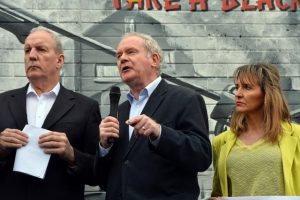 Many in the Republic now vote for Sinn Fein and ignore the fact that the party president, Mary Lou McDonald, eulogises terrorists like the late Martin McGuinness, left, and Bobby Storey

I’m constantly amazed at the staggering ignorance shown by most sections of southern Irish society, including politicians and the media.

If they know, do they care that IRA veterans in Belfast such as Storey helped to direct party strategy?

hat is worse than the ignorance is the extent to which the south seems anxious to believe the worst of unionists and the best even of men of violence.

But then nationalists, as we know, are brilliant propagandists, and unionists are absolutely not. It’s a cultural thing. The Catholic tribe in which I grew up was given an absurdly exaggerated and often invented narrative of their past sufferings which the Protestant tribe were not educated to counter.

Why else would terrorists have found a safe haven in the Republic: despite hundreds of murders having a cross-border dimension, between 1969 and 1998 only eight out of 113 United Kingdom extradition requests were successful?
And why did RTE recently screen Unquiet Graves, a documentary seriously criticised by a distinguished former RoI Minister for Justice for its one-sidedness, which any fool could see would inflame anti-unionist and anti-British feeling, although it had refused to show Cops on the Front Line or Lost Lives?

I often despair about the grotesque distortion of recent history in Northern Ireland , which is why I have been delighted with essays gathered by Brian Barton and Patrick J. Roach in The Northern Ireland Question, a book that looks at received wisdom with a sceptical eye and a reliance on hard evidence.

In “When Winning is Losing,” for instance, William Matchett, a former detective inspector in RUC Special Branch and these days a writer and senior researcher at the Edward M. Kennedy Institute for Conflict Prevention in Maynooth University, takes what he describes as “a practitioner’s perspective” in his invaluable analysis of the security response to the brutal IRA insurgency – which in turn provoked, often deliberately, an equally brutal loyalist terrorist reaction.

Matchett is the author of Secret Victory: the intelligence war that beat the IRA, a study of RUC Special Branch described by retired US general David Petraeus, the commander of coalition forces during the ‘surges’ in Iraq and Afghanistan, and later Director of the CIA, as: “A superbly researched, highly readable, and very thoughtful examination of the strategy that defeated the IRA – and of the implications of that model for contemporary challenges.”

Neither English nor Irish publishers wanted it, so Dr Matchett self-published it on Amazon. Last time I checked, it had sold over 30,000 copies.

In Matchett’s essay in The Northern Ireland Question, he describes three phases: “Reaction” (1969-75), is a period of tumult, confusion and demoralisation: in the first two years alone, 16 unarmed police were murdered by the IRA in Catholic neighbourhoods.

During “Adjust” (1976-82), a revitalised investigation-led RUC began taking back control of IRA areas with the support of Roy Mason, a Secretary of State terrorists hated, but after him, with the help of John Hume and Irish governments’ antipathy to the RUC, and naïve human rights organisations, a conspiracy of Provos and loyalists succeeded in having Crime Squads and the super-grass system “poleaxed by propaganda”.

The “Mature” phase (1982-98) of intelligence-led policing prevented more than 80% of all terrorist attacks but controversial events led to damaging investigations by people from outside Northern Ireland who had no knowledge of “the exceptional legal (and indeed moral) complexities peculiar to the sustained operation of an informer placed deep within a terrorist organisation”.

Since 1998 the RUC has been retrospectively put through the “scapegoat phase” of “squalid deals, lawfare and re-write” – of which successive British governments should be but are not ashamed. So too should be Irish governments and nationalists in general for swallowing the big Provo lies about collusion and “dirty war” designed to legitimise their evil and futile murder campaign.

Fair-minded people should consider some questions posed by Dr Matchett about common misconceptions.

If the RUC was anti-Catholic, how come the murder clearance rate for Catholics killed was almost double that for Protestants?

If security was brutal how come there was a 99% arrest rate of terrorists and three times more security forces killed than insurgent?

And if the internal security solution was not restrained or human-rights compliant enough for nationalist leaders and so-called human rights groups, what solution do they think would have worked?

If insurgents were defenders, why did they commit the majority of the killings, execute defenceless prisoners and kill twice as many Catholics as the security forces?

And if the PIRA were ‘peace-makers’ and all it took to end the Troubles was to talk to them, why did that not happen in 1972 when they talked to William Whitelaw or in 1974/75 with Merlyn Rees and why the long war strategy?

Maybe journalists might ask the Sinn Fein leadership for answers?