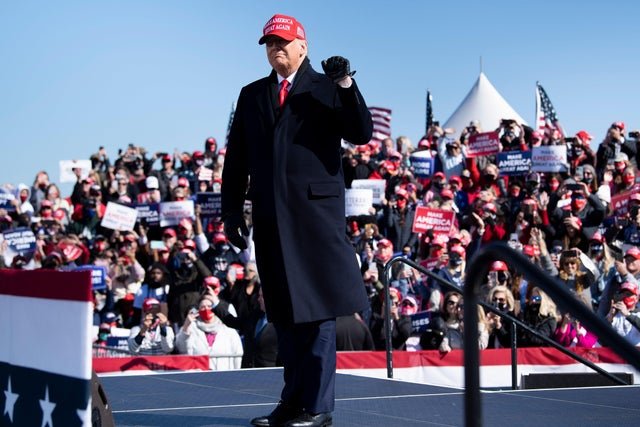 Trump may be on his way out, which I find hard to regret, but Trumpism, fortunately, is alive and well

This was the second US election in a row where I didn’t know which candidate I most wanted to lose.

With a choice between the incumbent 74-year-old President Donald Trump intermittently behaving like a madman and 77-year-old challenger Joe Biden showing signs of dementia, American voters had a hell of a choice.

Vice-presidents? Mike Pence is a safe pair of hands, but it was impossible to imagine him bludgeoning Trump into agreeing he was unfit to go on. 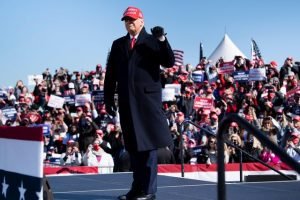 US President Donald Trump arrives for a Make America Great Again rally in North Carolina on Monday November 2, just before the election. The president could behave like a needy child, writes Ruth Dudley Edwards, but he did not forget his promises and gave incentives to the repatriation of jobs and made the economy roar (Photo by Brendan Smialowski / AFP)

Whereas Biden almost certainly would stand aside at the urging of family and close associates, thus handing the presidency to someone thought by many to be a divisive champion of identity politics and Black Lives Matter agitators, left-winger Kamala Harris, who was chosen as running mate because of her gender and colour.

Four years ago, as I followed the US election I couldn’t decide which I disliked and distrusted more — the uncouth braggart Trump or the smug, patronising Hillary Clinton.

In the end, Clinton’s dismissal of half of Trump’s supporters as a “basket of deplorables” who were “racist, sexist, homophobic, xenophobic,” and the hysterical hatred of him in the liberal media, made me relieved that Trump had won, unknown and scary though he was.

Despite his failings, Trump was one of the few politicians who had understood the desperate condition of millions of poor white Americans in ‘flyover country’, those states where the liberal elite never landed on their way from the east to the west coast.

It was all rather reminiscent of what was happening in the UK over the fallout from the EU referendum in June of that year.

I had then been appalled by the way in which so many Remainers had dismissed Leavers as stupid, uneducated bigots.

As a commentator on Northern Irish politics I was used to abuse in Ireland for my opinions, but I was taken aback by now losing friends in England.

The high spot came when at a literary party, a publisher I had known for 25 years, glared at me when he heard I had voted to leave and stormed off saying: “I would rather spend the evening with a child molester.”

What extreme Remainers and Democrats couldn’t seem to get were concerns about the unforeseen consequences of globalisation and technology, whether it was losing sovereignty to Brussels bureaucrats and Silicon Valley technocrats or markets to Chinese labour.

Where were the decently paid jobs?

Why were wages stagnant?

Why was patriotism being regarded as indecent?

After the election, I read and was powerfully moved by J.D. Vance’s wonderful memoir Hillbilly Elegy of growing up in Middletown, Ohio, a Rust Belt town where families were being destroyed by the disappearance of the low-paying, physical jobs on which they had relied for generations.

Like many other families, Vallance’s — who came from Kentucky — had fallen prey to alcoholism and drug addiction, yet they retained such Appalachian values as patriotism and loyalty.

Vance was saved by joining the Marine Corps where he learned the discipline that would take him to university and compassionate capitalism.

Trump went on being Trump, selfish, attention seeking and frequently behaving like a badly brought up, needy small child, but I found much to be grateful for.

He did not forget his promises. He removed pointless regulations, he gave incentives to the repatriation of jobs and he made the economy roar.

Asked if they were better off now than when he took office, 56% said yes, compared to 45% for Obama and 47% for George W Bush.

He started no wars but he forced Western politicians to face up to the damage being done to their economies and their security by Chinese economic imperialism; he halted the dangerous sell-out to Iran; he achieved Middle Eastern peace pacts between Israel and Arab countries that Obama would have given his eye teeth for; and despite enormous hostility from media and liberal opinion, changed the direction of the left-leaning judiciary ; and at a time when American traditional values are under attack began a fightback against ridiculous Woke agendas that seek to teach all white people the colour of their skin makes them racist.

Liberals were hoping now to reverse these changes, but with the judiciary and Republicans still in control of the Senate, unchallenged radical change will not be a possibility.

It would be good if Joe Biden can use his famed diplomatic skills to restore good manners and cooperation in Congress, achieve some constitutional reform and make friends with all the good guys.

I doubt if nowadays there is anyone on the planet capable of doing well as president of the United States.

The Founding Fathers were wise, and the constitution’s “We, the people of the United States” have much reason to revere how they built checks and balances into the system that has protected their democracy since 1789.

But they were devising a constitution for a modestly sized country, not a giant in a world of 24-hour news, remorseless media scrutiny, culture wars and rampant social media.

It is impossible simultaneously to carry out the largely ceremonial job of an apolitical monarch while running the country like a forceful Managing Director.