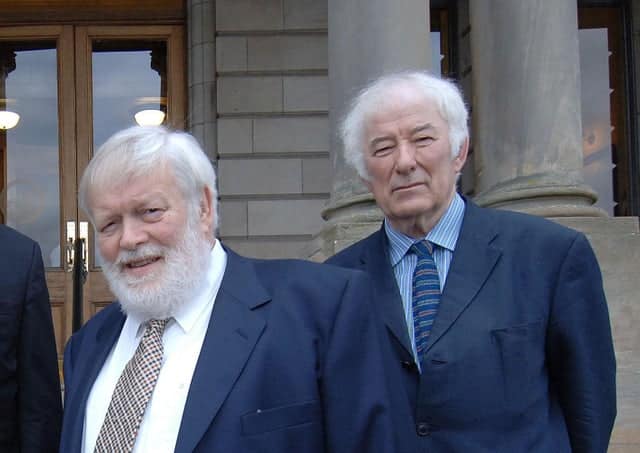 One reason that I, originally from the southern nationalist tribe, became extremely fond of Ulster Protestants, was that mostly that they say what they mean 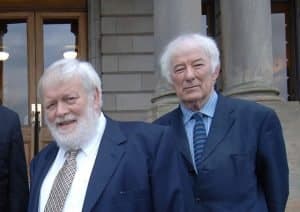 The Northern Ireland poet Michael Longley, above, said of Seamus Heaney, right, that he is “so loved and revered, everyone wants a bit of him, including unionists”

Culturally, my tribe is keen on what’s known as creative ambiguity. I’m not, not least because I think it often stores up trouble for the future.

I learned early on to appreciate that the greatest compliment awarded to anyone West of the Bann appeared to be that he or she was “genuine”.

David Trimble, who became a valued friend, explained in his brilliant Nobel Speech that his cultural tradition “puts a great price on the precise use of words, and uses them with circumspection”.

He caused offence to touchy nationalists by describing himself as “sceptical of speeches which are full of sound and fury, idealistic in intention, but impossible of implementation; and I resist the kind of rhetoric which substitutes vapour for vision”.

Which leads me to Gerry Adams, culturally Trimble’s opposite.

To my mind Adams is a very disappointed man. He has been promising a united Ireland all his adult life, yet he must know that the IRA which he extols but of course was never in, did more than any other group on the island of Ireland to make unity impossible.

You can’t bully an Ulster Prod. And the blatant hypocrisy of the republican leadership and the vicious hatred that spews from followers on social media mean that only the most gullible believe a word they say.

I am sure Adams is terrified that like Martin McGuinness, he’ll die in the Northern Ireland republicans promised to destroy.

A vain man who cares deeply about his reputation now and posthumously, he keeps burnishing it.

It is thought he still nurtures hopes of being President of Ireland, which is one of the reasons he keeps producing cuddly books (the most recent are about trees, cooking and now poems for Covid victims), and using his international reputation to bang the peace-loving drum. But try as he does to play the statesman, the mask slips.

Take his recent article for Newsweek.

He was plugging the Sinn Fein line that Brexit would lead to a united Ireland, which he was asking Americans to facilitate.

What would be the shape of that new Ireland, he asked. “How can do we confront sectarianism and ensure that a new Ireland is based on agreement, equality, respect and inclusivity?”

I read that bit with a predictable snort of derision, justified by his biographical note at the end: “Gerry Adams is a former President of Sinn Féin and one of the architects of the 1998 Good Friday Agreement, alongside John Hume and others.”

Yep. He couldn’t bring himself to mention David Trimble, who shared with Hume the Nobel Prize for Peace.

Sinn Fein has had a torrid few weeks with senior republicans like Brian Stanley TD getting into trouble over undiplomatic tweets which revealed what they really thought instead of what they pretended to think.

Reasonable unionists want a reasonable nationalist party that they can do business with and got on with non-sectarian SDLP leaders like Gerry Fitt, Seamus Mallon, Joe Hendron and these days Claire Hanna.

As a Belfast City councillor she proposed and got through the award of the Freedom of Belfast to that fine Anglo-Irish poet Michael Longley CBE.

Even though anti-violence, he seems obsessed with proving that he is as green as Sinn Fein.

This was depressingly visible in his emotional response to Seamus Heaney’s portrait being used alongside Mary Peters to mark — rather than commemorate or celebrate — the centenary of Northern Ireland “in the spirit of inclusivity, mutual respect and optimism”.

Off he went on Twitter, quoting Heaney’s line: “Be advised, my passport’s green/No glass of ours was ever raised/To toast the Queen,” which was written four decades ago in “merriment”, said Heaney, when he was understandably peeved that some of his poetry had been included in an anthology of British poetry without a by-your-leave.

Heaney stayed out of Northern Irish politics despite having his arm twisted by nationalists and later toasted the queen.

In his own Nobel prize speech in 1995 he spoke of “persistent partition of the affections in Northern Ireland between the British and Irish heritages,” and hoped that governments could “devise institutions which will allow that partition to become a bit more like the net on a tennis court, a demarcation allowing for agile give-and-take, for encounter and contending”.

In the 1990s, I had the pleasure of spending three happy and laughter-filled hours with Heaney on a Massachusetts bus on the way to an event we shared. He was a man of tolerance, openness and humour.

“Seamus is so loved and revered, everyone wants a bit of him, including unionists,” said Michael Longley, which was why I was so pleased to hear Gavin Robinson praising him on Talkback.

How he would have hated this honest effort to share two traditions apparently being branded by Eastwood as cynicism and, worse, by many other mean-spirited people, of cultural appropriation of someone who belonged to nationalists.

I hope all my readers have a happy Christmas, despite everything.