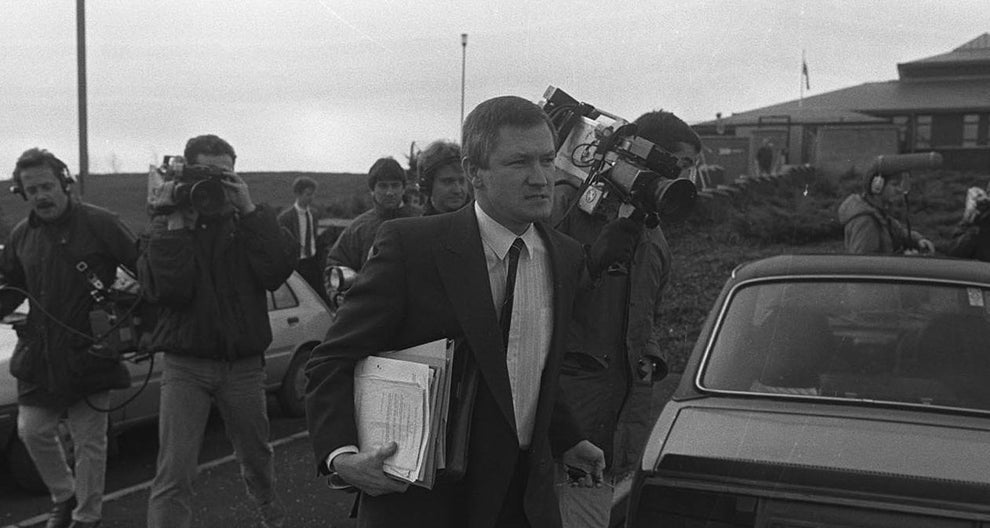 I’m very relieved that Secretary of State Brandon Lewis did not cave into the pressure from politicians at home and abroad by setting up a public inquiry into the murder of Pat Finucane. 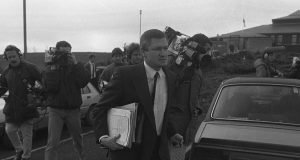 Pat Finucane in late 1988 at a shoot to kill inquest of IRA men. months before he was shot dead in early 1989. Ruth Dudley Edwards says: “He defended republican paramilitaries and the occasional loyalist, for he hated the state. Yet Sinn Fein managed successfully to rebrand him posthumously as a human rights lawyer”

He has not said there will never be such an inquiry, but he is quite properly waiting for other investigatory processes to be carried out, and unless after 30 years there is an uncovering of spectacular new information, I can’t see any responsible government ordering it.

There have been millions spent already investigating that dreadful murder, and it would have been pointless and deeply insulting to innumerable victims bereaved by murders that have been given little attention and would also be a shocking squandering of public money.

The Saville inquiry into Bloody Sunday cost £200 million, Prime Minister David Cameron gave a moving and sincere apology, but there are still many republicans who reject its conclusions because it failed to point the finger at Prime Minister Ted Heath, who they want to believe ordered the random killing of Catholics.

Finucane’s widow Geraldine has already said publicly that Margaret Thatcher “knew exactly what was going on” between “security forces, loyalist paramilitaries and the state”.

She is a woman of her word. I’m sure that she will keep her promise that “with every breath in my body I will fight them to the bitter end”.

And if there ever is an inquiry, I would be surprised if she would be satisfied by a judgement that did not point the finger at Downing Street.

Mrs Finucane’s position is understandable, but it appals me that Sinn Fein’s propaganda machine has been so successful in making even people who should know better swallow their take on the case.

Colum Eastwood, leader of the SDLP, for instance, outrageously announced that “The British state murdered Pat Finucane,” an allegation made by none of the investigations or reviews.

I’ll write another time about collusion and how bogus most of the accusations are, but today I’m thinking about other lawyers who were victims of terrorism, like Edgar Graham, the young barrister and law lecturer the IRA gunned down because he was a clever unionist politician and three Catholic judges Rory Conaghan and William Staunton, each murdered in front of a young daughter, and Tom Travers, who survived several bullets but saw his 22 year-old-daughter Mary shot dead.

Norman Baxter, a retired PSNI Chief Superintendent, put it well when he said: “The Finucane family are entitled to justice, as every citizen is. But the granting of a public inquiry creates a hierarchy of victims, which is in itself an injustice.”

I was closely involved with the brave victims who took a successful civil case against the Omagh bombers. Some of them, like victims of Kingsmill and many other atrocities wanted a public inquiry and didn’t get one.

And their victims really were innocents, unlike Pat Finucane, who was not the secular saint he has been made out to be, but someone inextricably linked to the IRA.

He defended republican paramilitaries and the occasional loyalist, for he hated the state. Yet Sinn Fein managed successfully to rebrand him posthumously as a human rights lawyer.

In 1999 former RUC Chief Constable Sir John Hermon said that “Pat Finucane was associated with the IRA and he used his position as a lawyer to act as a contact between suspects in custody and republicans on the outside.”

In 2003, during a new wave of media lamentations about St Pat, Sean O’Callaghan, a repentant IRA terrorist who had first met Finucane at an IRA meeting in 1980, was “angered at the sheer hypocrisy, the hand-wringing” in the British and Irish press.

He had first met Finucane in 1980 at an IRA meeting, and when in prison in the late 1980s was visited by him in his legal capacity fishing for information that might be of use to the IRA.

He was, said O’Callaghan, “first and foremost an IRA volunteer, and he exploited his position ruthlessly to wage his war on the state”.

Yet unlike three of his brothers, John, killed on active service as a volunteer and Dermot and Seamus who were imprisoned for terrorist activities, Pat Finucane, like Gerry Adams, was supposedly never in the IRA.

These included 26 soldiers and nine policemen: there were very few convictions.

Yet Finucane’s murder “dominates the headlines and all the other disgusting acts scream at their silence, forgotten, it would seem by all but close family”.

He reminded his readers that “the great majority of the security forces carried out extraordinarily courageous work in the most dangerous of circumstances and, lest we forget, died in their hundreds to make these islands are safer and better place for all of us”.

Along with other innocent victims, we should be thinking of the brave security forces today, as their enemies continue to demonise them.