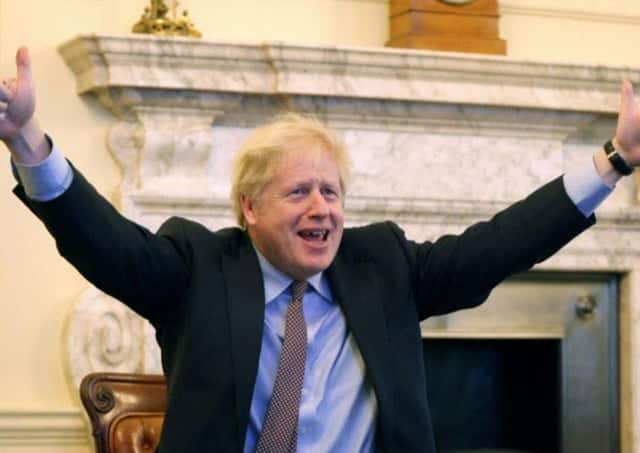 Nationalist or unionist, if you care about the well-being of the island of Ireland, this is a time to be positive, writes RUTH DUDLEY EDWARDS. 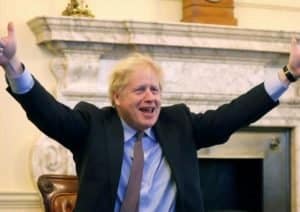 Boris Johnson celebrates his trade deal with the EU. The prime minister’s critics underestimated and abused him as a buffoon, a fantasist and a loser

I plead with my nationalist friends to take the advice of Colum Eastwood in his first address as leader: “For Ireland to be reunited, Northern Ireland has to work. This is the essence of our progressive nationalism.”

And I beg my unionist friends to remember that while republicans claim they win when they’ve lost, it appears to be in the nature of Ulster Protestants to claim defeat when they’ve actually been victorious.

You can tell from the hysterical invective on social media amid the endlessly repeated lie that the UK was trashed, that the Sinn Fein wreckers are fuming that their prophesies of disaster were proved wrong.

I was just listening to a disgruntled British fisherman talking like many others about disaster, sell-out and betrayal and felt rather cross.

He and his should stop and listen to those on the other side — the fishermen of Donegal and other coastal regions of the European Union — who also feel done down.

This is a deal which is a lot better for the British fishing industry than most people thought possible.

As the domestic quotas increase, in 5½ years when the United Kingdom regains full control of its waters, a revived and expanded domestic fishing industry could be in a position of great strength in the allocation of future quotas.

The DUP’s Jim Shannon, while warning that the “devil is in the detail,” said that this could be “a golden opportunity” for the fishing industry.

And the same is true for many other sectors of the economy.

Indeed the whole deal exceeds all British expectations except those of cockeyed optimists like the prime minister himself.

“From January 1st,” Boris Johnson said on Christmas Eve, in a calm speech on social media full of hope and expressions of friendship towards the EU and love of Europe, “we are outside of the customs union and outside of the single market. British laws will be made solely by the British parliament, interpreted by UK judges sitting in UK courts … For the first time since 1973, we will be an independence coastal state.”

I’ve been joyous ever since.

Yes, I understand the reservations many of you feel, but I truly think that just like the rest of the UK, Northern Ireland is better off out and with the right spirit, could prosper mightily.

Better still, after years of divisiveness and much media hysteria, this has ended up as the most successful kind of deal: one that works for both sides and leaves no one feeling humiliated (except perhaps those who like so many other underestimated Boris and abused him constantly as a buffoon, a fantasist and a loser).

I voted in the 1975 to stay in the European Economic Community, because I thought the Common Market was good for everyone.

But I came to like it less and less because of its mission creep, and cheered Margaret Thatcher when in 1988 she made a speech at the College of Europe in Bruges in which she said: “We have not successfully rolled back the frontiers of the state in Britain, only to see them re-imposed at a European level with a European super-state exercising a new dominance from Brussels.”

In 1990, we learn from recently released state papers, she was telling the Taoiseach Charles Haughey that the European Commission had been necessary in the early days, but had become “a totally non-democratic power structure,” and that she wanted to end the appointment by Brussels of EU commissioners in order to “give power to the Council of Ministers,” because she objected to “handing over authority to a non-elected bureaucracy”.

What was essential was the preservation of “the different traditions, parliamentary powers and sense of national pride in one’s own country,” which had been “the source of Europe’s vitality through the centuries”.

(Thatcher was right but she fell, Brussels went on power-grabbing and Brexit is the result.)

Like so many others I became a Eurosceptic, which is why I found myself embarrassedly briefly in bed with Sinn Fein in my opposition to the Nice (2001) and Lisbon (2009) treaties — which the Irish rejected in referendums and were then bullied into voting on again.

(Those were the days before Sinn Fein did a U-turn and became enthusiasts for the EU and anti-Catholic progressives.)

I dithered over my vote in the 2016 referendum because I have loyalties to Ireland too. But this was a referendum about the UK, and the incessant abuse of my side (fat, ignorant, stupid, racist, little Englanders) made it easier to vote to leave.

A technological solution to checking the border with the Republic would have been better, but because of the EU’s weaponising of the issue and Leo Varadkar’s slavish obedience to Michel Barnier, in the end it was the minimal border in the Irish Sea or no deal.

This is a time for all those who want a better future for the people of Northern Ireland to be bold and adventurous.

Happy New Year to you all.