With praise even from a Fine Gael politician, Martin McGuinness has the last laugh 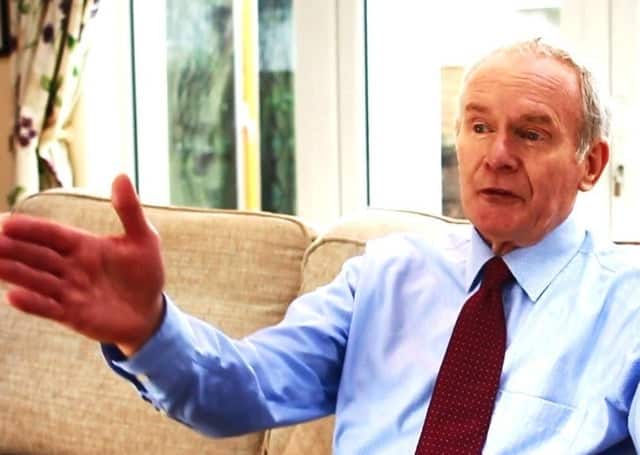 I get fed up sometimes reading and writing about Sinn Féin/IRA. 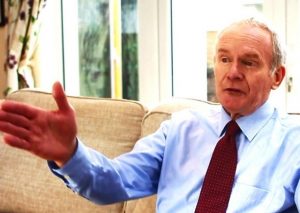 The former IRA terrorist commander and Sinn Fein deputy first minister Martin McGuinness, as seen in a “sickeningly romanticised” TG4 documentary about him in January 2021

But while violent republicanism is still a threat to peace and happiness of the people of the island of Ireland, most of the media let such terrorists get away – sometimes literally – with murder.

And the republican leadership (through lawfare) and the Shinnerbots (through abuse) are still trying to close me down, I’ll press on when I think it necessary.

Coincidentally, as I began writing, I saw this tweet from one of my choleric critics, who calls himself Sean Mcmenamins.

He’s one of the many with minds so closed that they become incoherent with rage if someone Irish does not sing from the Sinn Fein hymn sheet.

Like black activists infuriated by people of colour who have the temerity to have conservative opinions, their only solution is excommunication.

“Your not and never will be Irish,” Mcmenamins tweeted to me in December, “not with your rhetoric its vile and disgusting how you target so many young Republicans you should be ashamed of yourself no Irish woman would ever put down Irish citizens.”

This morning he had a practical suggestion: “why you not write about the @duponline supporting the nazi in america or do you not like to write the truth just attack after your bottle of plonk just waiting to see if any more rants from you then we think about taking you to court for defamation of character.”

I had, in fact, intended to write about what’s going on in Washington and why I think the despite all the glee being expressed by Chinese and Russian bots, the way things are working out since the US president became unhinged is a tribute to the strength of American democratic institutions.

I also wanted to consider why billionaires in Silicon Valley feel entitled to engage in political censorship.

I hope Twitter billionaire Jack Dorsey will explain why Donald Trump’s recent ill-judged yet legal tweets had him banned for life from Twitter while Ayatollah Khamenei of Iran still gets away with genocidal threats like: “Israel is a malignant cancerous tumour in the West Asian region that has to be removed and eradicated: it is possible and it will happen.”

But duty called. Adam Kula of this newspaper wrote about the documentary, Martin McGuinness, on the Irish language channel, TG4, and rang alarm bells about another exercise in sanitising IRA cruelty.

I suffered through the programme, and I mean suffer, because quite a lot of it is in Irish, and rusty though mine is, I love the mellifluous sound of the Connacht and Munster dialects and find the grating ‘prison’ Irish of Sinn Féin activists like Gerry Adams mostly incomprehensible and often painful to listen to. But there were subtitles.

What Adam Kula pinpointed was that in 87 minutes, there were only three mentions of terrorism, and only 4.5 minutes was allocated to victims of the IRA.

Two of those were English: Julie Hambledon, who has been fighting her whole adult life for justice for the 21 murdered in the 1974 Birmingham bombing and Colin Parry, whose son was blown up in 1993 in Warrington but who became friendly with Martin McGuinness whom he thought now a man of peace.

The only Irish victim featured was David Kelly, the son of Private Patrick Kelly, shot dead by the IRA in 1983, who was briefly featured confronting McGuinness in 2011 when he was running for the Irish presidency.

The segments were Fighter, Negotiator and Politician and the theme was a sickeningly romanticised version of freedom-fighter-to-peacemaker.

However they edited the interviews, only that with 85-year-old Bríd Rodgers — who was senior in the SDLP in the days when it stood up to Sinn Fein — really (and in beautiful Donegal Irish) expressed the obscenity of sanitising McGuinness’s unapologetic career as a mass-murderer.

She addressed full on what he had done to Patsy Gillespie — kidnapped and turned into a proxy bomb in 1990 that murdered him and five soldiers — an act described by Bishop Edward Daly as “unspeakable cruelty”.

“Even when I was a colleague of his,” she said, “every time I looked at Martin I thought of Patsy Gillespie.”

I have never underestimated McGuinness’s ability, his courage and his selflessness but they were nothing weighed in the balance against the fanaticism and callousness that made him sacrifice innumerable people to a worthless cause.

I met him a few times and experienced both his intimidating stare, brazen lies and psychopathic charm. Despite bringing down Stormont, he managed to secure a state funeral and put two fingers up to the British and Irish parliaments with a message on his tombstone (In Proud and Loving Memory of Óglach Martin McGuinness, Óglaigh na hÉireann, MP, MLA, Minister) that I loosely translate as ‘IRA Rules OK’.

TG4 should be ashamed.

I saw a tweet from an Irish MEP, Seán Kelly: “An excellent documentary on the life & and times of Martin McGuinness. He turned to peace & defended it with courage & competence. A man of great personality & charm. He ‘tamed’ Ian Paisley.”

McGuinness certainly has the last laugh.