Captain Tom was a man of duty, like those who served in UDR 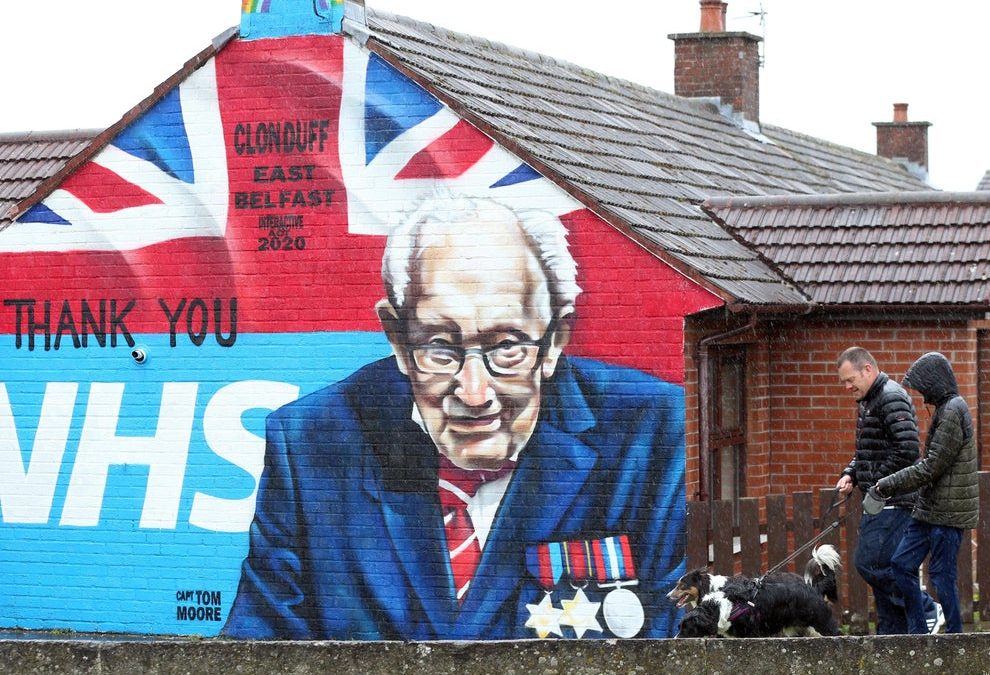 As I got to know people in Northern Ireland who had been caught up by terrible events, I developed a great admiration for ordinary people who cope courageously with extraordinary challenges. 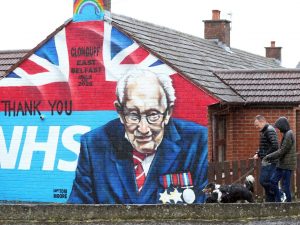 A mural in Clonduff estate, East Belfast of Captain Tom Moore, the British Army veteran who raised £30 million for the NHS during Covid. Ruth Dudley Edwards writes: “Few people did not admire this courageous old man, but you can always rely on Sinn Fein to be mean-spirited”. Picture Pacemaker

Most recently we have the phenomenon of Captain Sir Tom Moore, who served his country during World War II in India and Burma, made no fuss about it and lived a decent, low key life until, ten months ago, he was inspired once more to do his bit for his country and his fellow man.

He was 99 years old, by his own account “a quiet little soul living out my days peacefully,” his independence curtailed by a fall 18 months previously that had broken his hip, a rib and punctured a lung, but the April sun was shining and he decided that rather than do exercises in his room he would take his walker outside and try to do a few laps of the 25-metre driveway.

“Let’s see how many you can manage,” said his daughter Hannah, and her husband added, “We’ll give you £1 per lap, so see if you can do a hundred by your hundredth birthday.”

By the end of that lap, as he turned to try another, Hannah laughed and said, “You might even make a fiver.”

As they egged him on, and he doggedly tackled step by difficult step, he developed an ambition to raise a few hundred pounds to help the NHS.

His family set up a twitter account and a fundraising page with the target of £1,000 and got in touch with local media.

Proudly wearing his regimental tie and his medals, he took in his stride a bewildering succession of media interviews, which he handled with grace and wit, received 150,000 birthday cards from admirers of all ages, was described as a legend by his sporting hero Lewis Hamilton and knighted by the Queen.

At a time when the world is ravaged by coronavirus, there were few people who did not admire this courageous old man, but you can always rely on Sinn Fein to be mean-spirited.

The day he died, their party councillors failed to join DUP, UUP, SDLP and independent councillors on Fermanagh and Omagh District Council in paying tribute.

The group leader, Barry McElduff (who was forced to resign as an MP in 2018 when on the anniversary of the Kingsmill massacre he tweeted a video of himself with a loaf of Kingsmill bread on his head), declined to comment.

It’s not that they are pacifists. Sinn Fein enthusiastically celebrate, for instance, the lives of those they regard as the ‘martyrs’ of Loughgall, who murdered members of the British Army, the RUC and the UDR – whose part-timers offered the easiest targets as they went around their day jobs as postman, farmers, bus drivers and shopkeepers.

Not only did the IRA murder, maim and terrorise them, but Sinn Fein continues to smear mercilessly the reputations of fine men and women from the border area who lived lives of constant threat from republicans and sometimes loyalist paramilitaries that most people would find unendurable.

I was delighted that Anthony Leask, who was Commanding Officer 8th (Co Tyrone) Battalion, has produced Conspicuous Gallantry, a handsome compilation of memories from some of those who served during the troubles.

It gives an invaluable snapshot of how the UDR operated and what was involved in protecting the community, and tells moving stories of tragedy and heroism.

He had been badly injured in 1970 but stayed in the UDR until 1980, shortly after his wife died leaving him with seven children.

Employed by the Transport Authority, in 1982 he was letting some children off his school bus at Annaghmore when two masked gunmen opened fire, shot him dead and got away leaving a dead man and hysterical children.

“The family,” said his son Derek, who was also in the UDR, “was torn apart.”.

As Leask writes, for 25 years “men and women fought in their homeland without respite, every hour of every day, sustained by the bonds of family, friends and those with whom they served.

“The cumulative effect of the constant pressure is only now becoming apparent.”

Captain Tom would be the first to say that he was no different from those who served in the UDR.

He was a man who did his duty for his country. He will be remembered, but there are all too many who are forgotten or traduced.

When I think of them, I recall the last few lines of my favourite novel, George Eliot’s Middlemarch: “the growing good of the world is partly dependent on unhistoric acts; and that things are not so ill with you and me as they might have been is half owing to the number who lived faithfully a hidden life, and rest in unvisited tombs.”

These heroes need to be remembered.