First, the bad news, though you know it already. 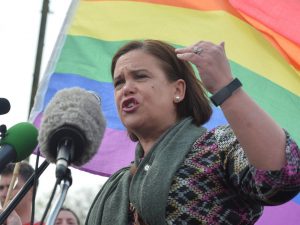 Mary Lou McDonald has a tough job, as the young progressives she courts down south have a shopping list that doesn’t go down well with many of Sinn Féin’s traditional supporters up north. I doubt if gender neutral toilets and unrestricted abortion are popular in Crossmaglen

Until the Sinn Féin leopard changes its spots there’s no hope of having a stable government in Northern Ireland working for all its people.

The Province is stuck for now with a disruptive political party fixated on gaining power in the Republic while in Norther Ireland keeping its voters happy and its hardliners quiet.

Mary Lou McDonald has a tough job, though, as the young progressives she courts down south have a shopping list that doesn’t go down well with many of Sinn Féin’s traditional supporters up north.

I doubt if gender neutral toilets and unrestricted abortion are popular in Crossmaglen. And those of the old guard who opposed the forerunners of the EU for four decades because they believed it undermined Irish sovereignty cannot have enjoyed Sinn Fein abruptly changing course to take a pro-EU position on the Brexit referendum, though it put up with it because it was sold as being anti-Brit.

As she strains to keep control of the two horses she is riding, it’s no wonder McDonald feebly describes her party as ”Euro critical”.

The good news is that the spectre of a united Ireland that Sinn Féin dangles daily in order to undermine unionist morale and rally its troops is just that.

It’s an apparition. Sinn Féin are in a time warp and thinking nationalism is beginning to recognise it.

Let’s start with what Simon Coveney, of all people, said last month to an Irish audience, in response to the Ireland’s Future group.

In case this noisy crew have passed you by, you should know its board and major voices are well-known nationalists like the pugnacious commentator Brian Feeney, and the sanctimonious Colin Harvey, a Queen’s professor of Human Rights Law.

They call themselves non-political and un-connected to Sinn Fein, and it is, apparently, of no consequence that their chairperson, Independent Senator Frances Black, sang a song of loss by the coffin of Martin McGuinness.

Anyway, they certainly share many of Sinn Fein’s aspirations about bringing about a united Ireland as soon as possible by means of dialogue about how to achieve it and the holding of early border polls, and they are read, heard and seen continually in the Irish media complaining and demanding.

Like so many other proponents of Irish unity, they’re hoping to make the campaign for unity an irresistible force.

Continual harping on that subject certainly spooks unionists, but from what I know of Ireland’s Future, it is doomed to failure because its leaders understand neither unionism nor the British state, and indeed, like the IRA, having a preponderantly northern leadership leads them often to misread southern public opinion and its politicians.

So it’s no surprise that they’re beginning to get on the nerves of mainstream Irish nationalism.

When they called on the Irish government to facilitate the holding of a citizens’ assembly on unity, Coveney responded that an assembly with the sole endpoint of a united Ireland would be unacceptable to unionists.

“We can’t have a predetermined outcome,” he said. “Any assembly on the future of Ireland would have to be genuinely open.”

(Unionist leaders please note: any dialogue should include such options as an independent Northern Ireland or the republic re-joining the UK in some kind of federation.)

Which isn’t what Ireland’s Future had in mind at all.

With Fianna Fáil and Fine Gael deeply unpopular, mainstream Irish nationalism has come to realise that the country could end up being run by hardcore republicans.

In the debate about whether McDonald had or hadn’t apologised for the murder of Mountbatten, Senator Michael McDowell, former Deputy Prime Minister and Minister for Justice, intervened in the Irish Times. He said that Sinn Fein can never “question the legitimacy of any part of the armed struggle carried on by the army council of the IRA precisely because their ideology still considers that the legitimate power, including the power of life and death, of the Irish Republic remain vested in that council”.

And another ex-Minister, Proinsias de Rossa, once a teenage IRA member who did time, then senior in Sinn Féin — the Workers Party, which under his leadership disconnected itself from the official IRA, and was an MEP, published a blistering letter in the Irish Times last Friday.

Agreeing with the Taoiseach that a border poll would be “explosive”, he asked why “virtually everyone in public life” feels the need to support a united Ireland and even describes it as a “noble aspiration?”

Isn’t it time, he asked, ”to reframe our national story to reflect current political and constitutional realities so that our primary schoolchildren no longer carry this 19th-century intellectual baggage which delivers some of them as recruits to the irredentists”.

Shouldn’t Irish citizens be challenging these assumptions. “Surely the ongoing death and insecurity caused by those who claim they are simply acting in pursuit of this ‘noble aspiration’ should give us pause for thought.”

There were still 100 walls dividing the community in Northern Ireland, he said. Shouldn’t the aspiration be reconciliation?