Linda Ervine gives hope to those who genuinely care about Irish 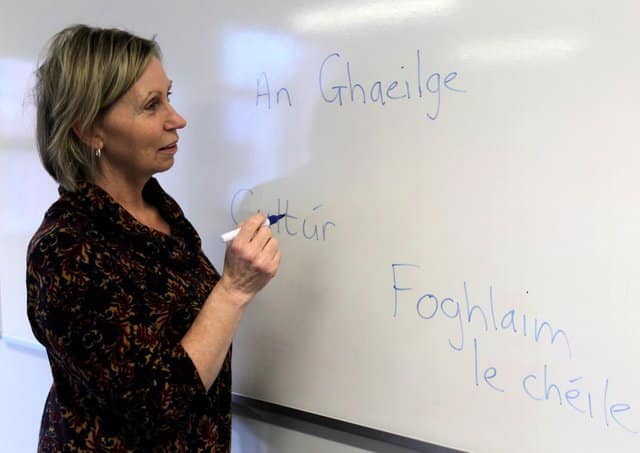 As a friend of the Irish language, I hate the thought of the squalid deal now being negotiated between the DUP and Sinn Fein.

Irish has been ill-served by uncompromising advocates, few of whom seem no more fluent in it than Edwin Poots is said to be in Ulster Scots — which, is, of course, a dialect, not a language, though from a culture quite as worthy of respect as its Gaelic equivalent.

I still smile at what the late commentator Noel Whelan wrote about a moment at a Sinn Fein Stormont press conference in February 2018 when a reporter asked a question in Irish.

“A look somewhere between bewilderment and terror fell over the faces of both Mary Lou McDonald and Michelle O’Neill, neither of whom appeared able to reply to the question, which fell instead to be answered in Irish by Sinn Fein chairman Declan Kearney.” 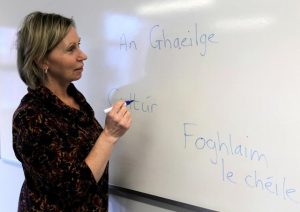 The gentle yet tough Linda Ervine, from a Protestant family of anti-sectarian socialists, set up Irish classes. She has been awarded an MBE in the Queen’s Birthday Honours

I see little evidence to suggest that Irish means much more to the majority of the Sinn Fein leadership and the boys in the Connolly House backroom the security forces tell us direct its strategy than as another mechanism for tormenting unionists, undermining their culture, indoctrinating children and extracting money from the British taxpayer.

I grew up in the Republic at a time when Irish was badly taught and beaten into children to get them through exams.

As with today’s Sinn Fein, hypocritical politicians who could not speak the language wasted public money forcing it on others.

My mother, who loved Irish and spoke it like a first language, lamented that compulsion and bad teaching had made generations of children hate it.

I was one of them, emerging disaffected from an Irish-medium primary school equating the language with brutality and mindless worship of violent nationalism.

By the time I grew up and recognised it as a language of beauty and historic importance for all the inhabitants of the island of Ireland, I was long settled in London, it was too late to recover my lost fluency, and Irish had become a weapon in the culture wars of Northern Ireland where Protestants understandably believed the Gaelscoileanna were dominated by Sinn Fein political activists.

The last century has been a tragedy for Irish.

Up to the early 20th century, Irish Protestants had been key contributors to popularising the language, but its hijacking on both sides of the border by violent nationalists and their apologists changed all that.

Which is why I was so heartened last week to see the gentle yet tough Linda Ervine, whom I greatly admire, awarded an MBE in the Queen’s Birthday Honours. She gives hope to those who genuinely care about Irish.

From a Protestant family of anti-sectarian socialists and trade unionists and the wife of Brian Ervine, a teacher who in 2010-11 was briefly leader of the PUP, Linda, with a friend, took a six-week introductory course in Gaelic and Ulster Scots with the East Belfast Mission and Short Strand cross-community women’s group.

She points out that in 1833 the Presbyterian General Assembly called the language “our sweet and memorable mother tongue”.

If anyone doubts this history let them explore the invaluable Dictionary of Irish Biography — now available free on www.dnb.ie — for brilliant but unlikely heroes like Richard Rutledge Kane, described as “ six feet two of doughty, truculent Protestantism” and known as “Roaring Kane”, who in the late 19th century was a patron of the Gaelic League and Belfast Grand Master of the Orange Order as well as a vehement opponent of Catholicism and Home Rule.

Turas’s key objective, says Linda, “is to change the narrative of the Irish language belonging to only one side of the community rather than to all, including the Protestant, Unionist, loyalist tradition” and she believes this plays a vital part in reconciling divided communities.

Her colleagues and students come from mixed religious and class backgrounds and the enterprise goes from strength to strength.

Local parents have realised that learning a second language greatly helps the development of young children.

The expansion continues with the help of grants and sponsors: “Yes, we run Irish classes and we are one of the biggest providers of Irish in Belfast, but also we have a tourism project and are in the process of opening a Naiscoil (Irish medium pre-school), we started another organisation Cairde Turas (Friends of Turas), we sell our own merchandise, we have a library with over 4,000 resources in Irish, Ulster Scots and we run a scholarship scheme with eight people at university.”

I recently saw that the historically-minded Presbyterian minister Mervyn Gibson, the Orange Grand Secretary, said he would encourage people to speak and learn Irish.

“We have no issue with it. It is how it is being use … We actually think an act would do a disservice to the language itself.”

I wish the Naiscoil well and hope Mervyn and his like-minded colleagues give it the support it deserves.