Joe Biden is ignorant, arrogant, stubborn and too damn old 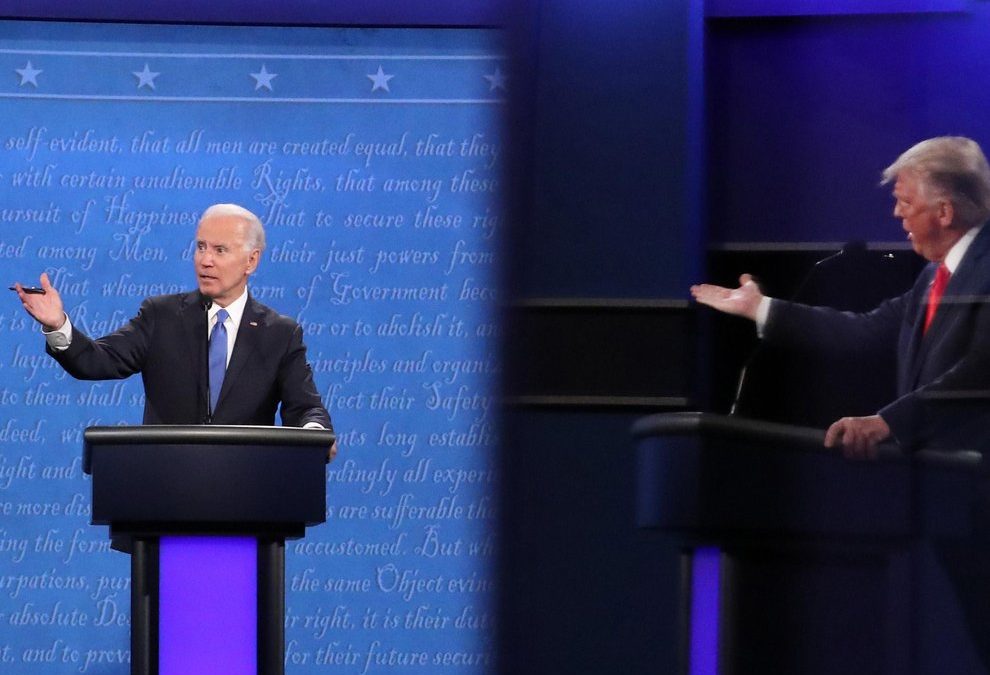 We’re living through a disaster that should be causing all patriotic Americans to wonder if it isn’t time to revisit their methods of choosing their leaders. 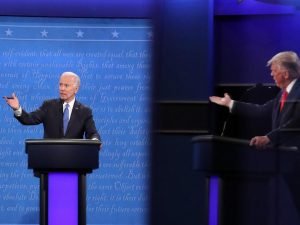 Joe Biden and Donald Trump in an October 2020 US election debate in Tennessee. Biden’s team seemed worried about his memory during the campaign. Trump still exudes energy at 75, despite having had Covid. The media and Big Tech companies so hated Trump they did everything they could to ensure a Biden victory

The world was understandably extremely rude about a system that produced Donald Trump.

It is now wondering why fateful foreign policy decisions are being taken by someone who seems clearly unfit for office: Joe Biden has been showing signs of dementia for some time.

Kamala Harris, who knows nothing about foreign policy, was chosen by him as vice presidential candidate soley because she ticked the sex, racial and looks boxes. And should she be run over by a train, the next one in line to sit behind the presidential desk is Nancy Pelosi, who is 81.

As I’m frequently reminded by my Sinn Fein critics on Twitter, I am old. But I’m also ageist.

I wouldn’t give 16 and 17-year-olds the vote and I won’t have my politics dictated to me by Greta Thunberg.

Nor am I enthused about voting for politicians who are well past their best.

I’m not as old as the Pope, or President Michael D. Higgins, or as Ian Paisley was when he became first minister and I’m younger even than Joe Biden.

But unlike them, I know my limitations. These days, I no longer sign up for lengthy book projects or enormously time-consuming voluntary activities. I agree with the headline of Tim Stanley’s article in yesterday’s Daily Telegraph: ‘The unspoken truth is that Joe Biden is just too old.’

It’s not just his age.

Mystifyingly, although Donald Trump apparently took no exercise and ate junk food, he was young for his age, and now, at 75, despite having had Covid, he still seems to exude energy. Whereas throughout the campaign for the presidency, it was blindingly obvious that conserving their man’s energy was a major preoccupation of Biden’s team and that they were worried by his increasing memory lapses and dependence on a teleprompter.

He had won the Democratic nomination because its HQ was terrified that Bernie Sanders would be nominated but lose the election, not because he was even older than Biden, but because he was an avowed socialist, so they chose the safest bet. The US media and Big Tech companies so hated Trump that they did everything they could to ensure Biden won.

He looks as if he’s been embalmed, but journalists never asked if he used Botox. Or why he has more hair these days than he had two decades ago.

At the moment the people paying the major price for the inadequacies of the American electoral system are the Afghans, though Europe will soon pay heavily as the jihadis return and refugee numbers swell. And while Trump announced the exit, he cannot be blamed for the state we’re in.

There have been no Nato fatalities for 18 months and there’s no reason to disbelieve Kay Bailey Hutchison, his envoy to Nato from 2017 to January 2021, when she said she believed Trump would have taken the military’s advice to keep 2,500 as a stabilising force. “We’ve had that position in Korea, we’ve had a position in Japan… It’s been part of our history that we have stayed to keep a lid on things.”

There was a brilliant editorial on the Reaction website at the weekend entitled ‘America’s Manchurian candidate is a dream ticket for the Jihadists’.

It quoted Osama bin Laden writing in 2010 an instruction to assassinate Barack Obama to facilitate Biden’s succession. “Biden is totally unprepared for that post,” he said, “which will lead the US into a crisis.”

There was no excuse for Washington being any less wise than bin Laden. Biden brags about his expertise in foreign policy, but as Robert Gates, Defense Secretary to both George W. Bush and Obama, put it in his 2014 memoir, he has been “on the wrong side of every national security issue in the past twenty years”.

How come that quote wasn’t being thrown at him in press conferences?

In the middle of all the distressing scenes we’re witnessing, what I find most repellent is the way in which Biden blames the Afghan army for running away.

As Reaction pointed out, Afghans are warrior people, who lost 69,000 men fighting the Taliban. The army had been given excellent equipment by Nato and trained in modern infantry tactics, but that made them dependent on air support, which the American suddenly withdrew, leaving an army whose corrupt government had stolen their ammunition and rarely paid them, simply unable to function.

The bewildering questions are legion. Why did Biden refuse to repudiate the Trump deal and start negotiations? Or, if he insisted on leaving, not at least consider keeping the lid on? Or, at the very least, negotiate a deal that allowed offered the vulnerable protection?

Why did he order the abandonment of the secure Bagram military air base and instead choose as the primary evacuation airstrip an airport inside a city with 4.5 million people and a vast number of refugees? Why were vital supplies and equipment abandoned for the Taliban to collect? And why did he talk to no Nato allies?

Because he’s tunnel-visioned, ignorant, stubborn, arrogant and too damn old?