Thomas McElwee’s story is one of lives ruined by hatred 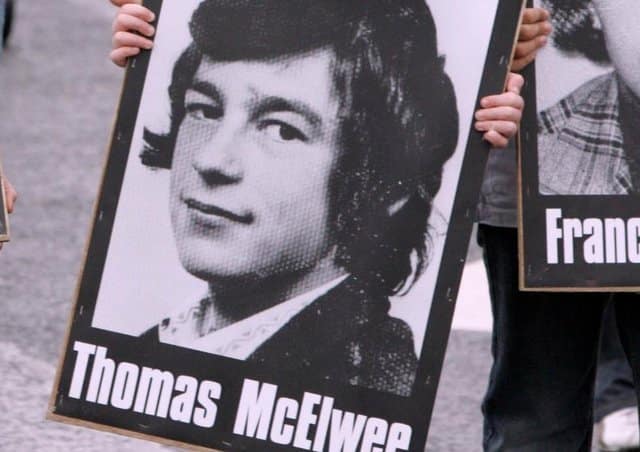 This is a story of some of the unintended consequences of political violence. 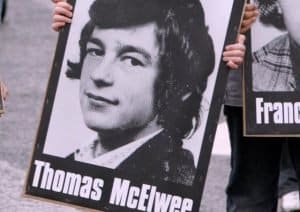 As a great deal of nationalist opinion has been revolted by a crass Sinn Fein tribute to Thomas McElwee that ignored Yvonne Dunlop, they released his last words, surprisingly beginning “I ask for forgiveness from everyone”

Thomas McElwee from Bellaghy, one of twelve children, was born in November 1957 into a republican and devoutly religious family, and loved machinery, stockcar racing, boxing and traditional Irish music, particularly rebel songs.

He was 14 when, influenced by his first cousin Francis Hughes, two years his senior, he joined Na Fianna Éireann, a Republican youth organisation that groomed young people for violence.

From there he became an active member of the South Derry Independent Republican Unit, led by Hughes and Dominic McGlinchy.

Members of the Official IRA, the three left after its ceasefire in mid-1972, and its subsequent adoption of a political path.

At the end of 1973, when McElwee was 16, the three joined the Provisional IRA laying ambushes and booby traps.

Both Hughes and McGlinchey quickly became highly accomplished, merciless killers hunted by the security forces, but McElwee had a lower profile.

At 18, in October 1976, he was still living at home on the day the family last met together when they hosted what was known as ‘The Stations’ when it was their turn to have a Mass said for family, relatives, friends and neighbours followed by the best hospitality and music they could provide. 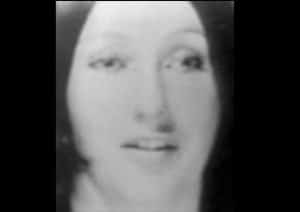 Yvonne Dunlop, 26, a mother of three boys helping out in her father’s Alley Katz boutique, was checking a shopping bag left by two girls, one of them McElwee’s girlfriend, when a bomb went off leaving her just time enough to shout a warning to her boy, 9, who surived. She was burned to death

The following day McElwee, who had in his pocket a list of shop targets in the largely Protestant Ballymena, 15 miles away, and his brother Bennie and two other Bellaghy men, were transporting incendiary bombs for the widescale bombing attack organised by McGlinchey when they went off prematurely: one lost half his leg, one two toes, Bennie’s eardrum was perforated and Thomas lost an eye.

They had not been the only transporter of bombs.

Around an hour later, Yvonne Dunlop, a 26-year-old Protestant mother of three boys helping out in her father’s Alley Katz boutique, was checking a shopping bag left by two girls, one of them McElwee’s girlfriend Dolores O’Neill, when a bomb went off leaving her just time enough to shout a warning to her nine-year-old.

He survived, but his mother was burned alive.

That evening, Sean Patrick McCrystal, a single 40-year-old Catholic who lived with his mother in Ballymena and was described at his funeral as ‘everyone’s friend’, went to a ‘wine den’ where he had a fight with William Blair, a 22-year-old who with friends followed him out of the back of the house, beat him badly, poured petrol on him and burned him to death on waste ground 60 yards from Alley Katz.

Blair and a 20-year-old were convicted of murder, the judge accepting that the killers (who are believed to have had UVF connections and have been seeking revenge), might have been so drunk as to have lost their senses, but he said that drink ‘only provided the courage necessary to carry out this foul, vicious and sadistic murder’.

Blair, who was given not less than 25 years in jail, was let out in the mid-1990s on licence and returned to jail, where too ashamed to tell his family he was back in prison, hours before the Life Sentence Review Board recommendation that he be released, he hanged himself.

Meanwhile, McElwee had a glass eye and his other one had been saved by the Royal Victoria Hospital.

He was one of several convicted of Yvonne Dunlop’s murder, with a sentence of 20 years, the same as that given his girlfriend, which was not reduced when in 1980 his conviction was reduced to manslaughter.

In jail he devoutly practiced his religion and demonstrated his commitment to the Provisionals: he was on the Blanket Protest, the 1981 hunger strike and the following year, a month after his cousin Francis starved himself to death and followed Bobby Sandys into international fame orchestrated by brilliant IRA propaganda, he became the fifth man to join.

Early in July, two days before the fifth death, an offer from the British government conceding most of the hunger strikers’ demands was accepted by the leadership of the prisoners but rejected by the republican leadership outside.

On August 8, McElwee was the ninth to die.

At his funeral, Danny Morrison denounced Catholic clergy who had prayed for an end of the hunger strike when they should have been praying for Irish freedom “from the British occupation of our country”.

In the last week, as a great deal of nationalist opinion has been revolted by a crass Sinn Fein tribute to McElwee that ignored Yvonne Dunlop, they released his last words, surprisingly beginning “I ask for forgiveness from everyone”.

As Shane Paul Doherty, a repentant IRA bomber explained, the words “guilt, sin and repentance” were “entirely unacceptable to the IRA”, so he reckons that while McElwee didn’t have the courage to say it clearly to his comrades, his words were “trying to express a desperate kind of repentance”.

McElwee said also he would have liked to promote ”peace and harmony among Catholics and Protestants and with the British”.

Well, if he inspires republicans to ask for forgiveness for all the death and destruction they created, there is a chance. But for now, let’s remember the dead, the mutilated, the bereaved and all those others whose lives were ruined by pernicious ideologies of hate.