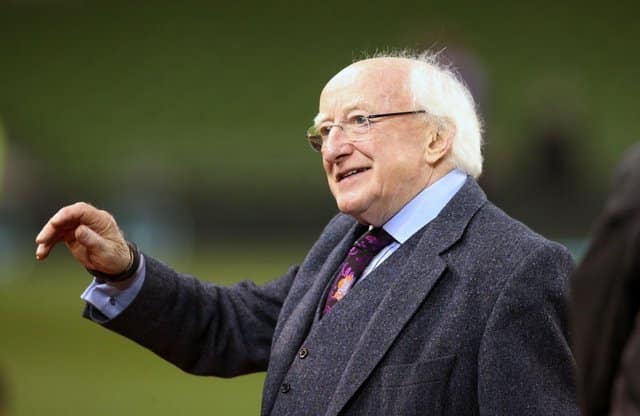 The row over President Michael D. Higgins’s bizarre rejection of the invitation to the ecumenical church event in Armagh has generated oceans of comment in the media, but one of the most acute analyses I’ve seem was in an email. 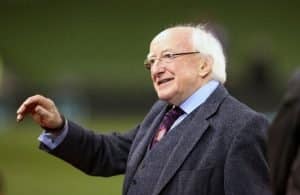 Feeding public opinion with anti-enterprise and nationalist politics, President Michael D Higgins is playing straight into the hands of Sinn Fein. No wonder they are on his side

Michael Gannon, an executive in the IT sector with a deep interest in history, wrote to a few friends: “The more I think about it I realise how far he has strayed beyond the bounds of his office without any restraint and, apart from his inappropriate behaviour, he’s setting a precedent that will eventually bring that office into conflict with the government here, most likely by his successor.”

Higgins’s two predecessors — Mary Robinson and Mary McAleese — “pushed the envelope through actions more than words, without major incident, apart from that appalling parallel McAleese made with Nazi Germany, which she had to retract”.

I was no fan of McAleese, but there was no doubting that her apology was sincere and abject, and she was largely forgiven.

In an Irish Times article, Dennis Bradley, the ex-priest who has laboured in the reconciliation fields alongside Protestant clergymen like Archbishop Robin Eames, was appalled at Higgins, but diplomatically hoped that he was capable of saying that he might have got it wrong, the constitution was to serve the people, ”even the unionist-minded people”, and that he had “no desire to confuse or hurt anyone, especially those who are growing more insecure and fearful of their constitutional future and political identity”.

The embarrassed Irish government desperately wish he would, but I’ll be amazed if he does, for, as Gannon put it, “Higgins uses his office as a bully pulpit for his views, with a freedom he never had either in the Labour Party or the Dáil, because as president he’s another Irish sacred cow”.

He should apologise and reverse his decision.

Or at least have the grace to resign.

Growing up in Dublin, a small capital city, in an academic family, I knew people who later became famous pillars of the establishment. Cearbhaill Ó Dálaigh and his wife became friends of my parents when they were all young and poor.

He was a lovable, friendly, modest, theatre-loving and open-minded young barrister who became my sister’s godfather. His rather reserved wife became my godmother. Mainly, I remember them as providers of nice Christmas and birthday presents.

My parents were apolitical and Ó Dálaigh was a Fianna Fáil activist, but that caused no breach. Much admired by Eamon de Valera, Ó Dálaigh became the youngest ever Attorney General and in time a reforming Chief Justice vigilant about upholding the rights guaranteed by the constitution.

He resigned after a decade because he thought he had been too long in the Supreme Court, and became the first Irish justice in the European Court. Following the sudden death of President Erskine Childers in 1974, at a time of great worry and instability over Troubles horrors, with no political party having the stomach for an expensive election, he was persuaded to accept the office unopposed.

Ó Dálaigh had a tense relationship with the Taoiseach, Liam Cosgrave, whom he felt failed to keep him properly informed on matters of state, and there was a massive breach when in 1976 — after the IRA had murdered the British ambassador — Ó Dálaigh exercised his constitutional right and referred a contentious Emergency Powers Bill to the Supreme Court.

An over-refreshed Minister of Defence, Paddy Donegan, was reported as describing him at an army function as ‘a thundering disgrace”.

That greatly upset Ó Dálaigh, who was the nominally Commander-in-Chief of the Defence Forces, and when the Taoiseach refused to accept Donegan’s resignation, the president stepped down because he felt it “the only way open to me to assert publicly my personal integrity and independence as president of Ireland and to protect the dignity and independence of the presidency as an institution”.

Whatever his politics, Ó Dálaigh was a lawyer and protector of the constitution and a man of great integrity whom no one ever accused of vanity. The stress may have caused him to die within eighteen months.

Higgins is different, for it is his personal vanity that is at the root of all this.

As Gannon put it, he has used the presidency to vent political dogma. He attacks colonialism and imperialism, and eulogises ruthless communists like Castro, while he “never visits the offices of free enterprise, or praises the Irish success stories like Kerry Foods, Ryanair, or the Collison brothers”.

He “uses his office as a bully pulpit for his views, with a freedom he never had either in the Labour Party or the Dáil, because as president he’s another Irish sacred cow”.

And feeding public opinion with “anti-enterprise and nationalist politics,” he is “playing straight into the hands of one party alone, Sinn Fein”.

No wonder they are absolutely on his side.

Years of work on the island of Ireland have gone into trying to improve the relationship between north and south.

Unless he apologises abjectly, Higgins will have damaged the reputation of the Republic with unionists probably beyond repair.

And as Gannon, says, he has also dangerously politicised the presidency.

He is a thundering disgrace, and the Irish government should have the courage to say so.