Straightaway, there’s a language problem to be cleared up. On this side of the Atlantic we have crime fiction, which can include anything from Agatha Christie to the grisliest of the grisly. The old-fashioned also talk about detective stories, even though much crime fiction has no detectives.

In the US, for crime fiction read mystery, and the distinction is made between cosies and hard-boiled, terms which are unknown here except to the cognoscenti. I am definitely in the cosy league – what Reg Hill, who is there too, calls ‘the Jane Austen end of the crime writing spectrum’. The modern world being what it is, I feature rude language at times and there are those who think my jokes (especially those – and they are many – directed at political correctness) can be tasteless, but nothing I write will give anyone nightmares. And, what’s more, though sex comes into my books, it happens off the page.

From about ten to seventeen, I spent every spare moment reading detective stories – Christie, Sayers, Ngaio Marsh, Michael Innes, Edmund Crispin, Cyril Hare and so on and on through the whole canon of the Golden Age. (For a gig at my favourite crime fiction festival – Magna cum Murder – I once wrote a short story – ‘Father Brown in Muncie, Indiana’ – which was a tribute to the festival director, Kathryn Kennison, as well as to G.K. Chesterton’s great detective: to my surprise it ended up in Patricia Craig’s Oxford Book of Detective Stories.) It wasn’t all cosies: Raymond Chandler was a hot favourite, as for a time was Ian Fleming, and later Robert Parker, Ross Macdonald and all manner of Americans. But I’m squeamish and prone to nightmares, so anything nasty or really frightening was and is out.

I fell into crime writing by accident (an unexpected offer), intended to write straight detection but couldn’t stop the farce and the jokes. What has happened unintentionally is that my novels have turned into (affectionate) satire on the British establishment. I was born and educated in Ireland until I was 21, after which I went to England, became a graduate student (in fifteenth-century ecclesiastical relations) at the University of Cambridge, moved to London where I was a telecommunications executive and then a civil servant in the Department of Industry, until in 1979 I became a freelance writer.

For reasons to do with my non-fiction and journalism, I know the British establishment well and rejoice in the enthusiasm with which its members help me with research, but I will always have the eye of an outsider. My targets so far include the civil service (Corridors of Death), gentlemen’s clubs (Clubbed to Death), academia (Matricide at St Martha’s), the House of Lords (Ten Lords a’Leaping), the Church of England (Murder in the Cathedral), publishing (Publish and be Murdered), Anglo-Irish relations (The Anglo-Irish Murders) and the literati (Carnage on the Committee). However my preoccupation with slaying the forces of political correctness has led me to widen my horizons in my new book, (Murdering Americans), which is mainly set on a campus in Indiana.

Although I’ve never lived in America, I know it well, have many friends there and read about it obsessively. As in the UK, I particularly enjoy the crime-writing world, which has the nicest people you could find anywhere (see my encomium to crime writers in the Daily Telegraph)’.

It’s back to the UK with my latest, Killing the Emperors, which is an assault on the corruption of the art market and its promotion of talentless self-publicists.

How my aunt writes her crime novels — a personal view by Neasa MacErlean, Ruth’s niece.

Read Declan Burke’s blog, Crime Always Pays for Ruth’s version of Banvillegate and the latest update. Read Ruth’s article in the Sunday Independent — Banville scored an own goal even before our crime fiction spat.

Read Ruth’s essay, The Informer: The LIfe and Art of Liam O’Flaherty in Down Those Green Streets.

Along with John Connolly, the indefatigable Declan Burke edited Books to Die For, which has just won the Best Non-fiction Agatha Award at Malice Domestic. It consists of short essays by more than 120 writers from twenty countries in which each champions a crime novel. My choice was Edmund Crispin’s The Moving Toyshop. 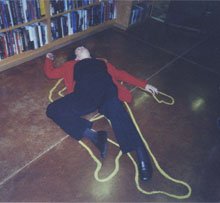