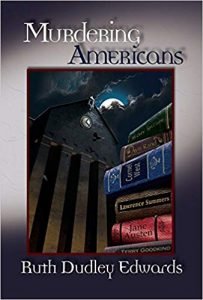 Accepting a lucrative offer to become a Distinguished Visiting Professor at Freeman State University, Baroness “Jack” Troutbeck arrives in New Paddington, Ind., with her vocal parrot. An intellectually honest conservative, Jack is appalled to find that the school is run with an iron fist by the crooked, mean-spirited triumvirate of President Dickinson, Provost Helen Fortier-Prichardson, and her vicious assistant, Dr. Ethan Gonzales.

Jack’s driver Betsy, an earnest, barely literate student, gives her a primer on the trio’s tactics, which range from intimidation to grade inflation to enforced enrollment in ridiculous classes. After hiring a Mike Hammer wannabe to look into the state of affairs, Jack is enraged when the investigator and his partner are killed in a bogus accident, and her outspoken comments start a riot.

Luckily, she has a gun, provided by the delightful southerner she met on the plane from London, a traveling companion whose lawyer son is soon defending her from every effort to force her out. Refusing to give up on Freeman, Jack persuades Robert Amiss, her Watson, to abandon his bride during their honeymoon and fly to her aid, and finally mobilizes the students to turn things around and help catch a killer.

Having cut a swathe through the British establishment with her satirical novels, Dudley Edwards fixes her sights on American academia. Her protagonist, the outspoken rightwinger Baroness Troutbeck, accepts the post of distinguished visiting professor at an Indiana university, where she finds both staff and students ensnared in the sort of politically correct tangle that would turn the most knee-jerk liberal into a savage reactionary. Undaunted by the suspicious death of the provost, the baroness takes on the thought police with her customary aplomb. An entertaining, provocative read.

A taste of some of the flak David Cameron can expect from Right-wingers when he convenes the party conference at Blackpool next month. The Marquess of Salisbury gave a warm tribute to his friend, Ruth Dudley Edwards, at the launch of her latest whodunit novel, Murdering Americans, at the Policy Exchange last night but was less effusive about the Tory leaders.  Robert Cranborne, a patrician Tory, dismissed the current “liberal regime” of David Cameron, and praised Lady Troutbeck, the heroine of the novel, for being a “peer of high Tory principles and pronounced Sapphic tendencies”.  Cranborne did once famously compare himself to “an ill-trained spaniel”.