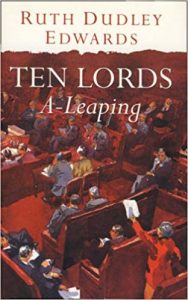 Ida ‘Jack’ Troutbeck, outrageous Mistress of St Martha’s College, has been elevated to the peerage, and it’s no exaggeration to say that the House of Lords will never be the same again. Disinclined to watch her language or moderate her manners, she appalls conventional peers, but plots vigorously with others to scupper an anti-hunting bill of which she violently disapproves.

Assisted by her old friend Robert Amiss, the baroness feels confident of winning the battle.  But she hadn’t reckoned with the campaign of intimidation mounted by the animal activists and the attempt on the life of one of her allies, shortly followed by scenes of horrifying carnage amongst the peers…

Published in the US by Poisoned Pen Press.

Available on kindle and as a paperback and hardback on Amazon. 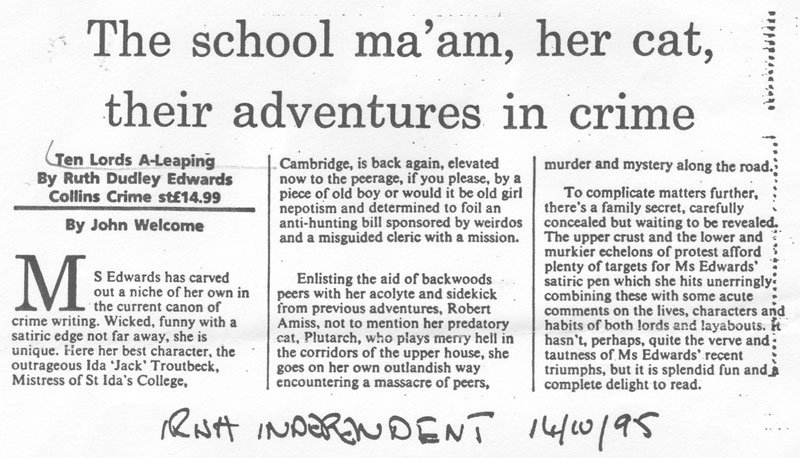 She’s filleted the Foreign Office, clobbered the Cambridge colleges, jeered at the gentlemen’s clubs and now Ruth Dudley Edwards has employed both barrels of her satire to lampoon the Lords.  The irreverent Irishwoman takes no prisoners in this everyday tale of fox-hunting folk on the receiving end of a killer as ruthless as a pack of hounds.

Baroness ‘Jack’ Troutbeck, introduced in the hysterically funny Matricide at St Martha’s, returns to rope in reluctant sleuth Robert Amiss to help the fox-hunting lobby defeat an anti-hunting Bill.  But before the debate can even get under way, a sinister killer wipes out ten of the noble Lords in one fell swoop.

Splendid fun and a complete delight to read…
She is unique