From my early twenties, I wrote book reviews for newspapers and journals (especially the Irish Press, The Irish Times, The Economist, The Independent); my first newspaper article came about because in 1993 The Independent, struck no doubt by the sheer size of the book, asked me to write for the day of publication about what it had been like to write the history of The Economist. 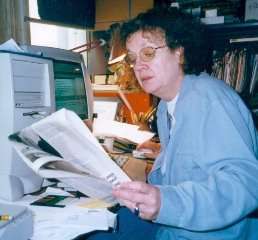 Ruth at home at work

I think they expected a serious account of the intellectual challenge of covering 150 years of a journal of opinions on everything; instead, for it was much on my mind, I talked of what is was like to have to rip out your linen cupboard to make way for a microfilm reader. It was that article that led them to encourage me to write amusing articles and later to offer me a slot as one of their light-hearted diarists. I had a wonderful time with this; every disaster became copy. It broke my heart when a new editor axed the diaries.

I write what I hope is amusing journalism from time to time for the Irish Sunday Independent, the Daily Telegraph and, occasionally, the Spectator.

Serious journalism happened because in 1994 I became so enraged about matters to do with Northern Ireland that I wrote an angry article which was carried by the Sunday Times. I found then that I had a point of view which was not being much expressed, and since then have written extensively on politics (particularly Northern Ireland) for almost every national newspaper in the UK, but most often for the Daily Mail and the Daily Telegraph.

In the Republic of Ireland, I have written for every national newspaper: I was for some time a regular columnist for the Irish edition of the Sunday Times, but for some years now have written mainly for the Sunday Independent. I also do quite a lot of radio and television, particularly as a commentator on BBC news programmes and on the BBC World Service.

I am not a member of any political party; what drives my journalism on Northern Ireland is my loathing of violence and hypocrisy. I am also prepared to talk – or rather, listen – to anyone and to try to understand the point of view of those the media don’t like – which is why I got to know and write about the Orange Order [see non-fiction]. I was surprised initially to find how controversial were my views, but the consequent vilification – which comes from Ireland, not England – has been character-forming. I’ve learned to laugh at abuse and threats. Much of the resentment comes from my being of Dublin Catholic stock: my friendship with unionists – even Orangemen – has struck many of my own tribe as treachery. I find this bigotry sad.

I have tended to become typecast as a commentator on Northern Ireland, but my passionate interest in politics encompasses the UK and the USA as well. And as for the European Union, well, I won’t get stuck into this issue here. If it figures bigtime in Carnage on the Committee [see Crime Fiction] – it is because crime fiction for me often serves as catharsis.

Writing Killing the Emperors stopped me blowing a gasket over the nonsense that is conceptual art. SaveSave

The Seven: The lives and legacies of the founding fathers of the Irish Republic

Ruth Dudley Edwards’ The Seven offers astute pen portraits of the leaders of the 1916 Rebellion. Her analysis of how these complex men, idealistic but also uncompromising, led a rebellion is a superb introduction to this period of momentous change in Irish history.

A fine, well-researched and beautifully-written ground-breaking book by a leader in her field.

bestselling author of Napoleon the Great

…a probing and detached appraisal of the seven revolutionaries who placed Ireland on a fateful course in 1916. It seeks to explore and explain rather than condemn or disparage. Connolly, Pearse, Clarke and the others obtain more sympathetic treatment from Ruth Dudley Edwards than many of their hagiographers are likely to provide.

Ruth Dudley Edwards brings a unique perspective to bear on the leaders of the Easter Rising: empathetic, interrogative, and highly conscious of the questions raised and left unanswered by their sacrificial gesture of rebellion. With this book she completes the analysis begun with her path-breaking study of Patrick Pearse nearly forty years ago, providing a group biography of the disparate revolutionary leaders and a clear-eyed consideration of the legacy they left. It should be required reading.

In telling the stories of perhaps the most influential of all Irish national heroes…Ruth Dudley Edwards has written a fascinating, balanced and highly readable book based on thorough research.

With its sharp observations…as well as its demystifying impulse and wry alertness to every nuance of 1916-symbolism, The Seven is an important book. It disentangles the strands of motivation and aspiration which previous generations had tended to lump together.

A first rate read. Moving the narrative along with colour, verve, pace and attitude.

A provocative, personal, fascinating, and utterly readable contribution to a hugely important debate.

author of Armed Struggle: The History of the IRA

No one has done more to reinvigorate debate about the 1916 Rising than Ruth Dudley Edwards.

The folly, the courage and the tragedy of the Easter Rebellion have never before been presented with such clarity and brilliance. At times, it reads like the work of fiction that it is not, as Ruth Dudley Edwards, with a novelist’s unerring narrative skill, interweaves the lives of the seven signatories of the Proclamation from their disparate beginnings to their common end. To have brought such dazzling freshness to a very familiar story is an extraordinary achievement. Nothing less than a masterpiece

Sunday Times columnist and author of Watching the Door

The leaders of the 1916 Rising are generally regarded by Irish nationalists as heroes and they are honoured as the founding fathers of the Irish Republic. A minority take the view that the Rising was unnecessary and undemocratic. In a timely re-assessment, the respected historian Ruth Dudley Edwards looks at the legacy of seven leaders of the Rising, including the legacy of violence which has blighted Ireland in the century since. Her book deserves a wide readership both by traditional nationalists and by those who believe it is time to reassess the legacy of the Rising.

Fascinating and penetrating…innovative and engaging…can be welcomed as an important contribution to the discussion and a serious contribution to our understanding of an extremely complex and challenging period in modern Irish history.

‘Dudley Edwards…clearly knows how to entertain as well as inform. This book feels like the result of a lifetime’s research, neatly condensed into a colourful narrative that readers of all political persuasions should be able to enjoy.

If the Easter Rising was a passion play in which real gore was spilt, Dudley Edwards represents its leading actors as terrorists rather than freedom fighters. But she brings them to life with empathy and zest