Aftermath: The Omagh Bombing and the Families’ Pursuit of Justice 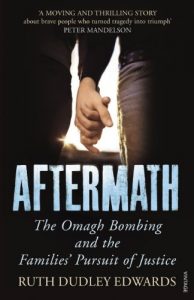 A remarkable and inspiring human story: an insider’s account of the groundbreaking and successful campaign to bring the Omagh bombers to justice.

The Omagh bomb was the worst massacre in Northern Ireland’s modern history – yet from it came a most extraordinary tale of human resilience, as families of murdered people channelled their grief into action. As the bombers congratulated themselves on escaping justice, the families determined on a civil case against them and their organisation. No one had ever done this before.

It was a very domestic atrocity. In Omagh, on Saturday, 15 August 1998, a massive bomb placed by the so-called Real IRA murdered unborn twins, six men, twelve women and eleven children, of whom two were Spanish and one English: the dead included Protestants, Catholics and a Mormon.

Although the police believed they knew the identities of the killers, there was insufficient evidence to bring charges. Taking as their motto ‘For evil to triumph, all that is necessary is for good men to do nothing’, families of ten of the dead decided to pursue these men through the civil courts, where the burden of proof is lower. This is the remarkable account of how these families – who had no knowledge of the law and no money, and included a cleaner, a mechanic and a bookie – became internationally recognised, formidable campaigners and surmounted countless daunting obstacles to win a famous victory.

How these mothers and fathers and sisters and brothers turned themselves into the scourge of the Real IRA is not just an astonishing story in itself. It is also a universal story of David challenging Goliath, as well as an inspiration to ordinary people anywhere devastated by terrorism.

Aftermath: The Omagh Bombing and the Families’ Pursuit of Justice published by Viking. Hardback, £17.99. Available as kindle and paperback on Amazon.

Winner of the Sunday Times ‘Current Affairs book of the year’.

Read interviews with Ruth and reviews of Aftermath.

This vital, powerful book tells a story of loss, resilience and terrorism… Distinguished historian and journalist Ruth Dudley Edwards was centrally involved in the bringing of this Omagh civil case. In her impressive and vivid book, Aftermath, she becomes the families’ crusading chronicler… this book…recounts a remarkable story of victims’ resilience and vindication, and deserves to be very widely read.

For anyone interested in this chilling area of recent Irish history, Aftermath is recommended reading.

…a remarkable and moving story, told in masterly fashion by Ruth Dudley Edwards. Her narrative grips from the start. It is as compelling as a thriller and displays the sympathetic imagination of a great novel.

A remarkable and moving story, told in masterly fashion by Ruth Dudley Edwards. Her narrative grips from the start. It is as compelling as a thriller and displays the sympathetic imagination of a great novel… This is an extraordinary and uplifting story of how a group of ordinary people managed to get the justice they sought. It is beautifully told.

Ruth Dudley Edwards’ account of the Omagh bomb is all the more heartbreaking for her mastery of the small human details… Its portrayal of cruelty and suffering is relevant far beyond Ireland.

This vital, powerful book tells a story of loss, resilience and terrorism… this book…recounts a remarkable story of victims’ resilience and vindication, and deserves to be very widely read.

The merit of Ruth Dudley Edwards’s valuable book about the Omagh families’ “pursuit of justice” is that it meticulously chronicles how they did so, charting the enormous efforts involved in raising large amounts of money and getting the case under way.