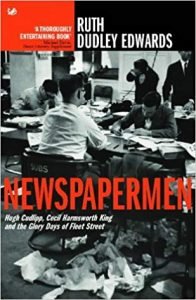 Newspapers: I fought this book – an account of the intertwined lives of Cecil Harmsworth King and Hugh Cudlipp – for the best part of 100 pages; then I succumbed.

What put me off initially was the prologue portrait of King framed by his “gold and green Kermanshah carpet, the Anatolian prayer mats, the Chippendale and Hepplewhite chairs, the 17th-century sideboard, the Adam fireplace, the shelves of rare books on Africa”. Attention to detail is all very well in a biography, I thought – but this kind of detail?

Apprehensively, I moved from there into the minutely described upper-middle-class Edwardiana that framed King’s life as a boy. Was nothing – I found myself asking – ever thrown out? The 50 or so boxes of King papers transferred to Boston University (in exchange for £10,000 and an honorary doctorate) were a defiant rampart against oblivion, even though they were censoriously weeded by his second wife, Ruth Railton, before they crossed the Atlantic. And there is more, from a cornucopia of other sources: letters, diaries, autobiographies and biographies; the details of the sibling rivalries and discontents, and the memories of parental inadequacies; the emotional crippledom, the chauffeurs, nannies and country houses. Can there be such a thing as knowing too much about one’s subject?

By then, of course, I was hooked. As it moves up through the years, Ruth Dudley Edwards’s book displays a mastery of its subjects with a delightfully easy style and a mordant wit. She has done more than simply display the splendidly tangled and at times quite anarchic experiences of two quite extraordinary individuals; she has also situated them impressively within the political and social times in which they lived.

Unlike his uncle, the first Lord Northcliffe (who was born in Chapelizod but never considered himself an Irishman), King, who was born in England but spent much of his childhood in Dublin, did, at least intermittently.

He came back to live in Donnybrook in his retirement, and his memorial service in St Patrick’s Cathedral, after his death in 1987, attracted a congregation that included such unlikely fellow-worshippers as the Rev Ian Paisley, Daithi Ó Conaill, and the British ambassador. It would take too long, in a brief review, to explain why, but read the book to find out.

In between, there was a fascinating life. Two lives, in fact. King was initially employed in the journalistic empire of his uncle, proprietor of the Daily Mirror and the out-on-its feet Sunday Pictorial. Technically, he was confined to the advertising area; but soon, in conjunction with the gifted Welsh journalist, Cudlipp, he turned the Sunday Pictorial around (it eventually became the Sunday Mirror). Together, they inaugurated a revolution in British journalism, the reverberations of which can be felt, even today, on Dublin news-stands.

There are two main sub-plots. One is the story, Greek in its intensity, of how King ousted Bartholomew, the original dark genius of the Mirror, and was in turn ousted by Cudlipp, when King’s latent megalomania threatened the empire both had built. The second is the story of the British popular press in the first two-thirds of the 20th century. Woven through both of them is the thread of two personal and emotional lives: King’s, in particular, is such that it is understandable why Railton, at the end of the day – but ineffectually – tried to halt the whole biographical project.

At times, he appears little short of monstrous: his cruelty to his first wife, his self-absorption, his meanness to his children and his delusions of grandeur were, it seems, only partially offset by his better qualities, and by some of his friendships. It says something about both men that his relationship with Cudlipp survived even their fatal passage of arms in the boardroom of the International Publishing Company in 1968.

If you wanted to meet someone for a drink in El Vino’s, King wouldn’t be your first choice, or your second; but Cudlipp would be welcome any time.

Ruth Railton, on the other hand, if even half of what Dudley Edwards has to say about her is true (and there is no reason to suppose it isn’t all true), was a perfect horror, beside whom even King can at times appear mellow and benign. Capricious, possessive and manipulative, she seems to have been, to all the King children, the stepmother from hell.

And then there were the newspapers. There were two factors underpinning the success of the Mirror. One was that it was not only sensational but also serious. Then as now, the combination was notoriously difficult to achieve. The balance needs to be tipped only ever so slightly, and a good tabloid suddenly turns into an embarrassing outcrop of the entertainment industry.

The second is that it discovered a new audience, principally among people who had never, or rarely, bought newspapers before. That readership has been fought over so fiercely for decades now that the protagonists are in danger of forgetting that large chunks of it are being sucked into the vortex of television, never to return. There is little sign, as yet, of a new Cudlipp who could meet this challenge, on either of these two islands.

John Horgan is Professor of Journalism at Dublin City University

A hurtling journey, often hilarious and sometimes monstrous, through newspapers, class, politics and sex; not just the double biography of two extraordinary men, but a sideways history of Britain in the fifties and sixties

Ruth Dudley Edwards has adorned with anecdotal dazzle a psychological thriller in which intrigue is flecked with madness.